Megan was born and raised in the great state of Maine. She grew up in Vassalboro, but after having her daughter at 17 years old, she moved to Orono/Old Town in order to attend the University of Maine and make a better life for her daughter. After graduating from the University of Maine with a degree in Business Administration, Megan went on to work at several retail jobs and positions at UMaine before starting her own E-rate Consulting business where she has been able to help school districts across New England secure millions of dollars in funding for their Internet services and wireless networks. When her family was ready to purchase their own home, she picked Milford as the community that she wanted to permanently reside in.

While Megan has always been casually interested in politics, a major life event made her brought her back into the world of community organizing. Megan faced a situation that many Americans will face. Her health insurance denied life-saving medical treatment for her daughter by simply ignoring the advice of doctors and labeling Kailey’s treatment as “not medically necessary”. After her appeals with her insurance agency were denied, she learned everything that she could about the health insurance industry, and partnered with a local non-profit to appeal at the state level. Thankfully, Megan was able to win her appeal and her daughter was able to receive the treatment that she so desperately needed.

Megan volunteered for several local and national campaigns beginning in 2016 and has been heavily involved as a community organizer with various groups in the Greater Bangor area. In 2020 she was elected as a National Sanders Delegate representing Maine’s Second Congressional District to the Democratic National Convention.

Affordable and accessible healthcare for all Mainers will not only help us live longer and happier lives, it will improve our economy by adding good-paying jobs, protecting our rural hospitals, and supporting entrepreneurial activity. The COVID-19 public health crisis has further highlighted this need.

We have work to do to support our kids and find ways to help them to stay in Maine. Megan will find ways to improve rural schools.

We must support small business investment in Maine, connect to the world with broadband internet. This will help Maine youth, including career and technical programs, thrive.

We must support small business investment in Maine, this is the backbone of our economy.

Our people are our greatest resource, but a healthy environment sustains its people. We can save money while protecting our natural resources, through waste reduction and renewable energy. Our tourism economy is based on a healthy Maine. 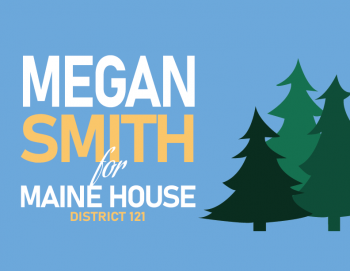